Carolyn Raffensperger, JD, is the executive director of the Science and Environmental Health Network and the co-editor of Precautionary Tools for Shaping Environmental Policy and Protecting Public Health and the Environment. Not surprisingly, she is well known for her work on the precautionary principle (you can find her TEDx talk here), but her thought ranges across a wide variety of questions that address the relationship between law and the environment.

This is the first substantive discussion of law in The Conversation but, as always, we range over a variety of other topics including science as a social institutions, the tension between the individual and the collective, and spirituality. Utilitarianism is a large part of this conversation and Carolyn argues that it is the invisible idea beneath much of our socially and environmentally reckless behavior.

Carolyn’s episode connects to a large number of other conversations in the project, from moments of resonance with Timothy Morton and Wes Jackson to a sharp critique of Max More and Robert Zubrin. The back-and-forth between More’s proactionary principle and Raffensperger’s precautionary principle is especially intriguing.

The episode concludes with a suggestion that The Conversation is not amongst our interviewees, but between interviewees and audience. Does Carolyn’s critique destroy the hypothesis beneath this project? Rest assured, Micah and I will discuss ad nauseam. 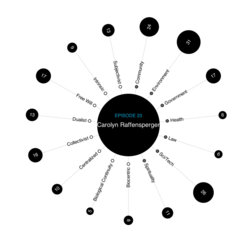 ← Episode 22: Wes Jackson
A battle plan for the eastern front →