George Lakoff is one of the most influential living linguists. He has revolutionized how we think about metaphor’s role in cognition, the grounding of metaphor in the human body, and the metaphorical basis of mathemetics. Equally important, Lakoff is extremely active outside of the lab, as a teacher, author, speaker, and political consultant. His books include Metaphors We Live By, Don’t Think of an Elephant, and Moral Politics.

I spoke to George for two hours and, I think it’s fair to say, he constructs the largest system of interconnected theories yet featured in The Conversation—which is something you can do when you’re a polymath with four decades of research under your belt. Our first hour was spent with me trying to get a comprehensive outline of the system and its various moving parts, while our second hour had a more conversational rhythm as we discussed the philosophy of science and implications of his research. As always, I’ve edited the full interview down to a manageable size.

There were a lot of potential connections between Lakoff and other interviewees in The Conversation but, unfortunately, time constraints made it hard to explore most of the paths that opened up. Despite that, this is an epic conversation and, whether you find it revelatory or maddening, it is worth every minute of your time. 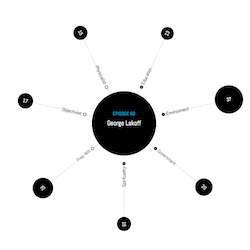